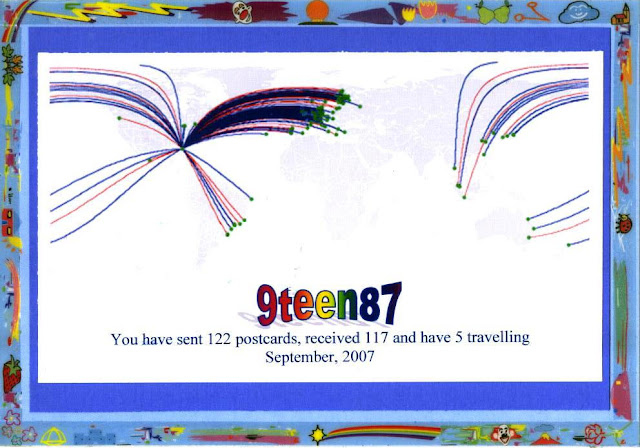 I made this postcard with a map of the official postcrossing.com postcards sent and received as of September, 2007 -
postmarked in 2007 with 3 cent 'red, white and blue star' stamp and 39 cent 'Green Arrow' stamp
(I had to make it a little darker than it actually is, if not, the map didn't show up)
No comments:

Email ThisBlogThis!Share to TwitterShare to FacebookShare to Pinterest
Labels: Hand Made, Maps 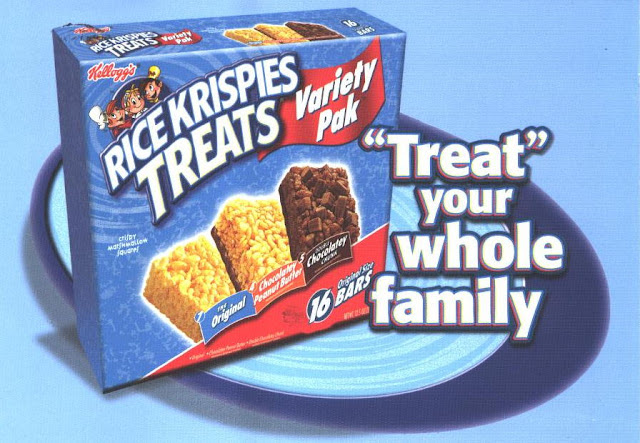 Kellogg's Rice Krispies Treats "Treat" your whole family -
with the snack that's o.k. to crave. Individually wrapped anytime snacks perfect for the lunchbox, the car, the whole little league team - - whenever you get the urge to snack!
Located in the wholesome snack section. -
this postcard is from 2002, but mailed in 2007 with 26 cent 'wild cat' stamp
I love this 'free rack' postcard!!

not on the postcard...but here is the Recipe..

In a large saucepan, melt butter over low heat. Add the marshmallows and continue to stir until the marshmallows have completely melted. Remove from heat.
Stir in the Kellogg's Rice Krispies cereal coating them well with the melted marshmallow mixture.

Using a buttered or silicone spatula, press the mixture evenly into a 13 x 9 x 2 inch pan which has been buttered or sprayed with non-stick spray or lined with wax paper.

Cut into squares when the mixture cools.

Microwave butter with marshmallows on high setting for 2 minutes in a microwave safe mixing bowl. Stir together when melted. Microwave again on high for 1 additional minute. Stir in cereal, mixing until well coated. Press into pan as above.
No comments: 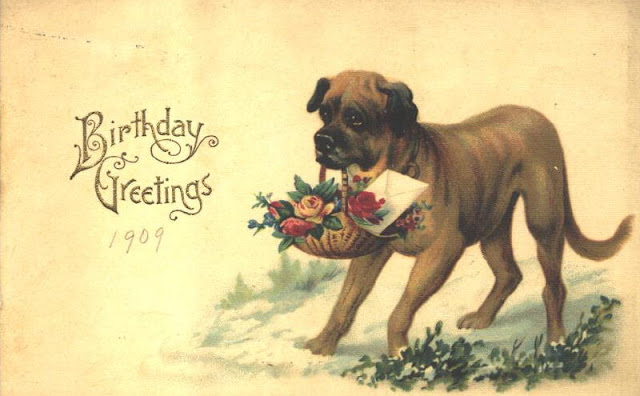 I have many dog postcards - since we have three English Mastiffs though, that is my favorite dog card. - If you have one that I don't, please let me know if you're up for a postcard swap!!
No comments: 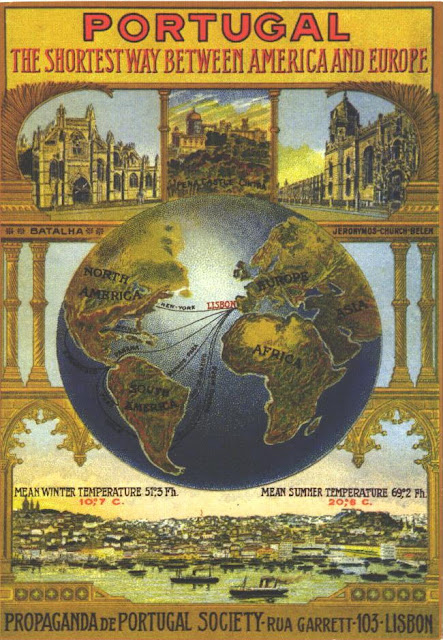 Portugal -
The shortest way between America and Europe
I LOVE this postcard! - so interesting ;-)

this card has writing, but is not postmarked (card is made in 2006)
No comments: 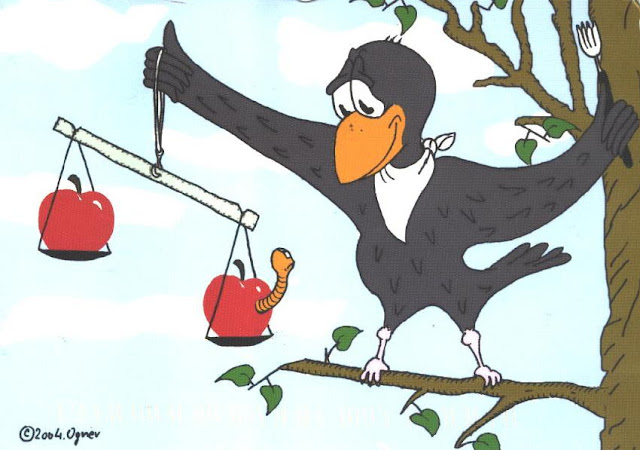 this is an 'Ad' (free card)card for the Mocco Club in Russia - postmarked in 2007 with Russian 10p. 'ballerina' stamp -
I found this in the web...Mocco Club serves up a range of soups, salads and hot dishes. More importantly, they also have a great selection of cakes and tarts ~ our main reason for dropping in while walking along Nevsky Prospekt.
You order and pay at the counter, then your food is delivered to your table (marked by a numbered sign you are given).
1 comment: 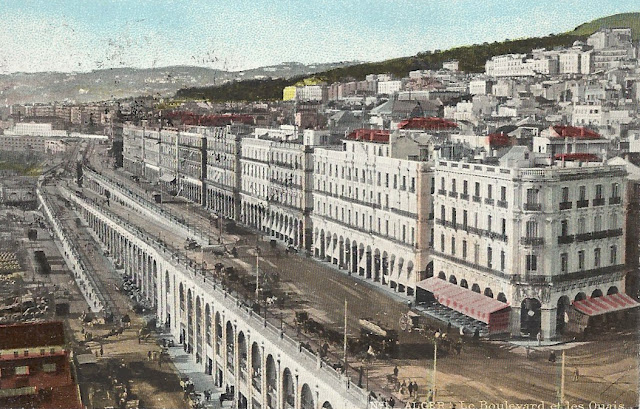 postmarked for free from the U.S. Army Postal Service in 1915. (During World War 1)

Alger is the French name for Algiers, the capital of Algeria.
No comments:

I love this handmade postcard! - With the map in the background, glitter glued to the top and bottom, and the vintage looking letters and suitcases, I'd think it was old ;-)
It's postmarked in 2007 from Finland. - I hope to get more great handmade cards like this.

Email ThisBlogThis!Share to TwitterShare to FacebookShare to Pinterest
Labels: Hand Made 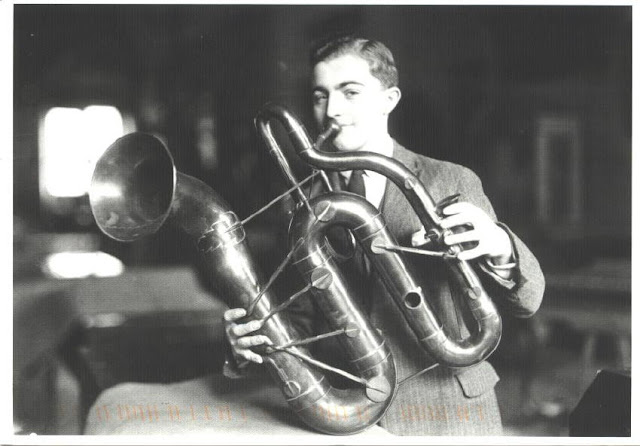 Collectie Spaarnestad Fotoarchief, Haarlem - Art Unlimited postcard - postmarked from Finland with Suomi Finland 'bird' stamp in 2007
This is a serpent, but not the normal kind. There were relatively few ever made in this style, and they were made after most serpents had already been replaced with newer models. The guy in the picture is only posing, not actually playing, since it would be impossible to play it with the missing key (you can see the dark open hole).
1 comment:

Email ThisBlogThis!Share to TwitterShare to FacebookShare to Pinterest
Labels: Black and White, Music 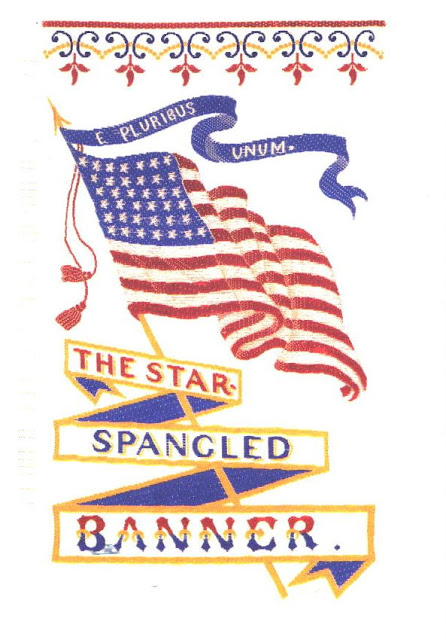 The Star Spangled Banner - (USPS stamp design on postcard)The top of a brightly colored silk bookmark woven as a souvenir at the World's Colombian Exposition in Chicago in 1893. The rest of the bookmark (not shown on the stamp) contains the words and music of the national anthem. - postmarked on September 11th - 2007 with matching stamp and 3 cent red, white, and blue star.

On Sept. 13, 1814, Francis Scott Key visited the British fleet in Chesapeake Bay to secure the release of Dr. William Beanes, who had been captured after the burning of Washington, DC. The release was secured, but Key was detained on ship overnight during the shelling of Fort McHenry, one of the forts defending Baltimore. In the morning, he was so delighted to see the American flag still flying over the fort that he began a poem to commemorate the occasion. First published under the title “Defense of Fort M'Henry,” the poem soon attained wide popularity as sung to the tune “To Anacreon in Heaven.” The origin of this tune is obscure, but it may have been written by John Stafford Smith, a British composer born in 1750. “The Star-Spangled Banner” was officially made the national anthem by Congress in 1931, although it already had been adopted as such by the army and the navy.

O say, can you see, by the dawn's early light,What so proudly we hail'd at the twilight's last gleaming?Whose broad stripes and bright stars, thro' the perilous fight,O'er the ramparts we watch'd, were so gallantly streaming?And the rockets' red glare, the bombs bursting in air,Gave proof thro' the night that our flag was still there.O say, does that star-spangled banner yet waveO'er the land of the free and the home of the brave?

On the shore dimly seen thro' the mists of the deep,Where the foe's haughty host in dread silence reposes,What is that which the breeze, o'er the towering steep,As it fitfully blows, half conceals, half discloses?Now it catches the gleam of the morning's first beam,In full glory reflected, now shines on the stream:'Tis the star-spangled banner: O, long may it waveO'er the land of the free and the home of the brave!

And where is that band who so vauntingly sworeThat the havoc of war and the battle's confusion,A home and a country should leave us no more?Their blood has wash'd out their foul footsteps' pollution.No refuge could save the hireling and slaveFrom the terror of flight or the gloom of the grave:And the star-spangled banner in triumph doth waveO'er the land of the free and the home of the brave.

O thus be it ever when free-men shall standBetween their lov'd home and the war's desolation;Blest with vict'ry and peace, may the heav'n-rescued landPraise the Pow'r that hath made and preserv'd us a nation!Then conquer we must, when our cause it is just,And this be our motto: “In God is our trust!”And the star-spangled banner in triumph shall waveO'er the land of the free and the home of the brave!
No comments: 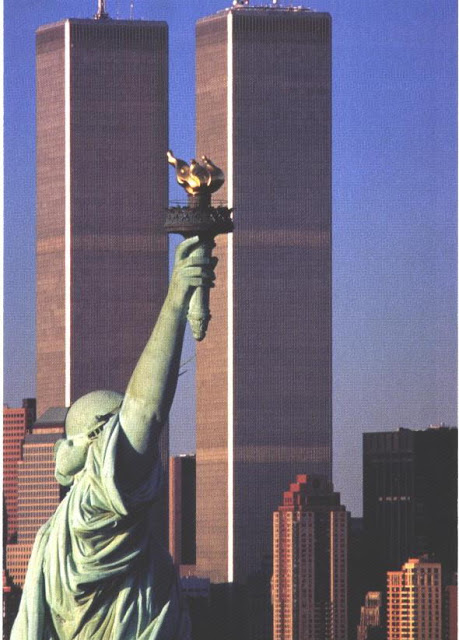 
I have two of these postcards, one unused and this one, which is postmarked on 9-11-2002 with the Heroes USA firemen raising flag stamp 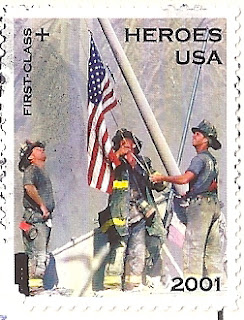 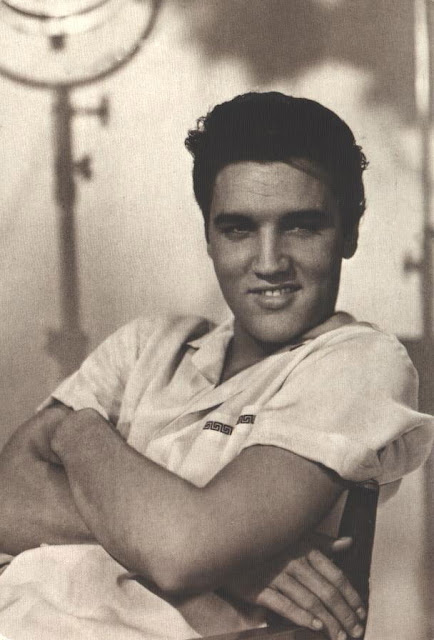 Not on the card, but here is some information about the movie...
King Creole is an American motion picture directed by Michael Curtiz, released by Paramount Pictures on July 2, 1958. The film stars Elvis Presley, Carolyn Jones, and Walter Matthau. It is Presley's fourth movie, and adapted from the 1952 novel by Harold Robbins, A Stone for Danny Fisher.

I inherited some of my Elvis postcards from my mom. She was a HUGE Elvis fan and had quite a bit of memorabilia.
No comments:

Death of a Star, Egg Nebula

Space Views from he Hubble Telescope
Death of a Star: Egg Nebula

The Egg Nebula is a large cloud of dust and gas ejected by the star and expanding at a speed of 115,000 miles per hour. Such nebulae are a rare sight; they are in an evolutionary phase that lasts a very short time (1,000-2,000 years) 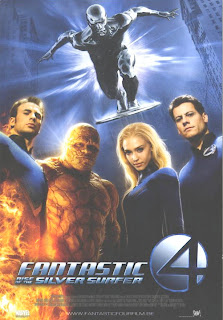 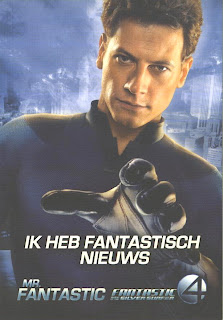 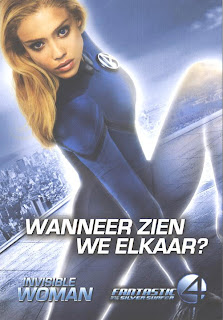 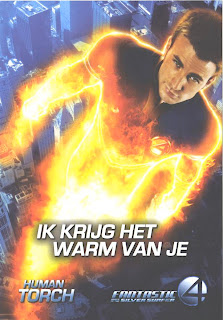 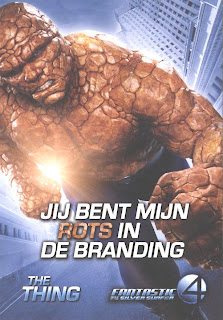 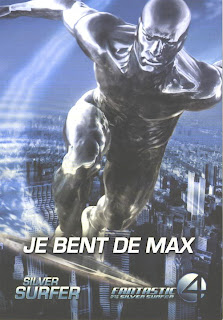 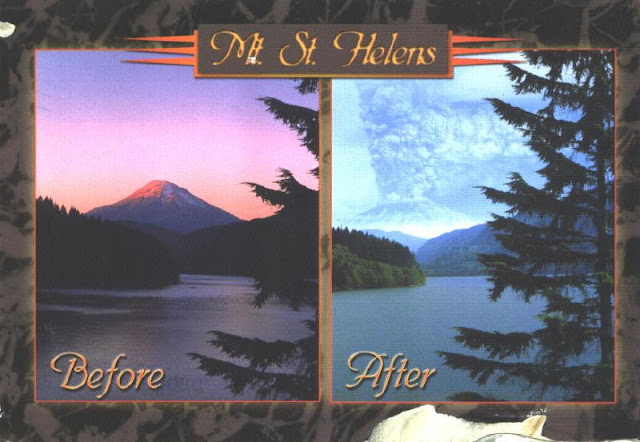 Mt. St. Helens & Yale Lake, Washington, before and after the volcanic eruptions. These scenes offer a dramatic comparison - on the left, the mountain's majestic beauty is captured, and on the right, the awesome power of the eruption is visible. The eruption occurred on May 18, 1980. The force blew 1300 feet off the top of the mountain, spreading ash eastward across the continent. - Photo(right) by Steve Terrill - the sender writes, "Even though we live about 250 miles away, we got about 1 inch of ash all over everything!" - postmarked in Feb 2007 with 24 cent Common Buckeye stamp
No comments: 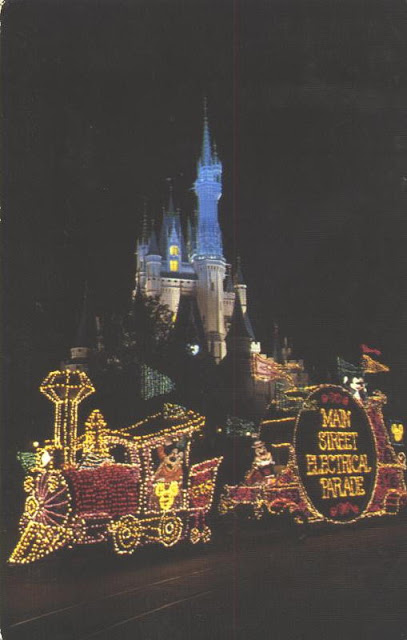 Disney - Main Street Electrical Parade - It's razzle-dazzle excitement. More than a half-million twinkling lights enliven scenes from favorite Disney stories in this sparkling procession of spectacular nighttime enchantment.
postmarked in 1980 with 15 cent Oliver Wendell Holmes stamp - this card is written from a young child to his grandparents -
- - - - - - - - - - - -
The Main Street Electrical Parade is a regularly-scheduled parade, created by Bob Jani, famous for its long run at Disneyland at the Disneyland Resort most summers between 1972-1975, 1977-1982, and 1984-1996. It features floats and live performers covered in thousands of electronically-controlled lights and a synchronized soundtrack triggered by radio control along key areas of the parade route. The parade was also spun-off many other versions that ran or continue to run at Disney parks around the world. 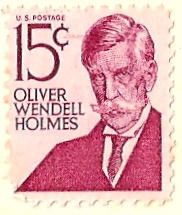